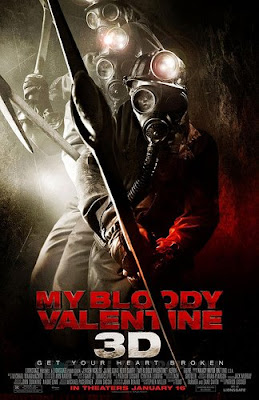 after been restraining myself from going to movie theater for the whole semester, i lost. haih. (i'm not proud of that okay!)

anyhoo, since i've break the promise, might as well i enjoy it right? ;p i went to kompleks teruntum with my favourite girls, alia kyn chicho deqma and mamas. zee wasnt around and fiey? she rather stayed at home, ALONE.

we were supposed to watch confessions of the shopaholic, but the movie was cancel because we arrived late and they assumed that no one is going to watch the movie. darn it! so we were thinking fast and furious, but some of us are not interested. so , last resort, my bloody valentine.

the movie was quite interesting, at first it does seems a bit gloomy. but later, i didnt realise i was yelling the wholeee time. quite embrassing, but then, wth, there are only 6 of us in the theater. hahaha.

should watch. even though i was quite frustrated, to know that my bf is the villain in this movie. poor me. =(